Let's do some art. Lightpainting

Writing and painting with light. This idea is not a new one:
You just take a camera, switch it to longtime exposure and paint with a flashlight, or LED, some characters in front of it. This works properly, if you are able to draw. I'm not.
So I just stood by admiring those people, but knew I will never be able to do this. Two years ago, while I visited the 30c3 (Chaos Computer Congress), there were some guys from Blinkinlabs. They sold some bags full LED stripes. I bought on e myself anf found out, that you are able to blink own images with it. But unfortunately mine broke after some days of testing. They are not (very) waterproof...

Since nearly ever and millions of other ideas later, the broken strip was stowed in some drawer and got dusty. I could have repaired it or build a new one, but I set the priority to "very low".

Since the beginning of this year, I sometimes shoot a video with my GoPro, while i do my projects and upload the result, after some editing, to Youtube. Nearly nobody cared about. But it is a lot of fun for myself and some people visit my blog, after they saw one of my clips. I get some clicks. Which is nice. I'm fine with it.
But this changed rapidly, when I upload my first project for "Kliemannsland": It got some likes "likes" on Twitter and people started watching it. Suddenly it rains subscribers and my videos are being watched. What a great feeling! There are unknown people out there, watching my work, asking questions, liking the stuff and giving advices (and even insulting me, but okay: It's youtube. Trolls and haters...). Within a week this stuff gained over 6000 subscribers out of 250 before:

At this time I thought, this will be the maximum and decided to do a small "Thank You"-video (to be honest, meanwhile there are about more then 10.000 subscribers). It should be a small and short project. Just a few hours of work, maximum. Short preperation. Just something short. I remembered the old LED-Strip: "It would be nice, to say: Thank you, with a drawn picture!"
Aber I took a look at the LED-strip, I found out, that it has cracked on multiple places, additionally. It seems I had creased it somehow whith in the last years within the drawer. Gnar. So I have to build a new one. It's just an Arduino with some lights.
I was lucky, because I had everything that was needed:

This pieces have to be arranged on a breadboard like this: 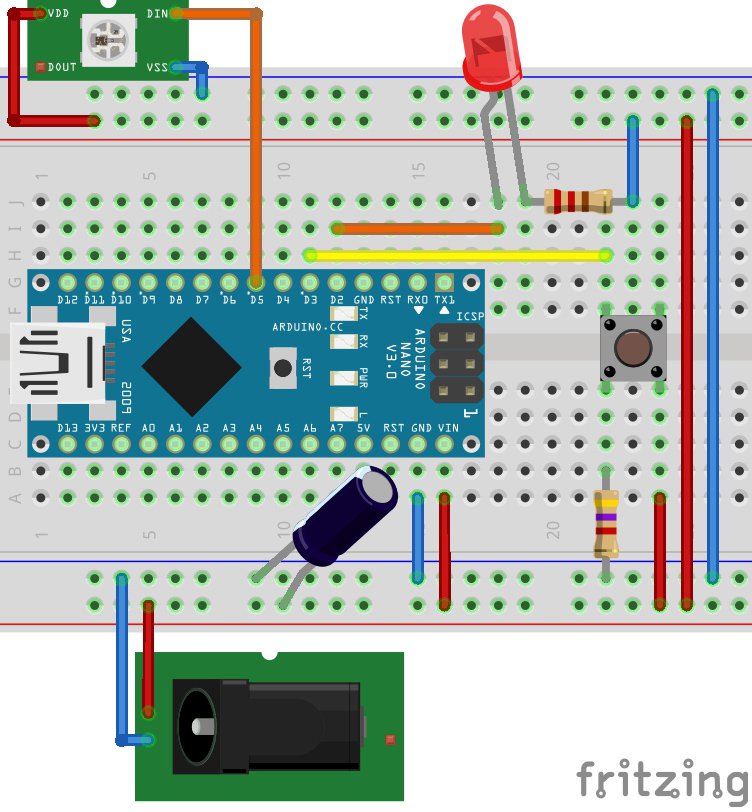 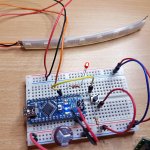 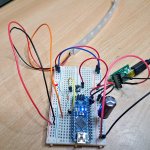 Short explanation: The button is used to start or end the animation. It's connected via a Pull-Up-Resistor (~4,7 kOhm) to the board. The led shows, wether the Arduino is ready to start the animation or not. Be sure to add a 220 Ohm resistor, when you add it to the breadboard.
I added a capacitor just to be sure, the LED-strip won't get damaged, caused by some voltage fluctuations. The strip just need it's 5 volts and get it's data just from one datapin.

How does it work
This is easy: You take a picture with a height of 60 pixels and cut it, instead into rows, into columns. These information have to be stored onto an Arduino and have to be blinked, column by column by the strip. You just have to glue the strip, arduino ... everything ... onto some sort of stick/bar whatever and walk with this construction in front of a camera. Which is operating and shooting in "long time exposure"-mode.

Pattern Paint
Of course: You can write your own code to generate the information for each column, or you use a compiled software. I decided to use the already written one, called Pattern Paint. It's small and OpenSource: 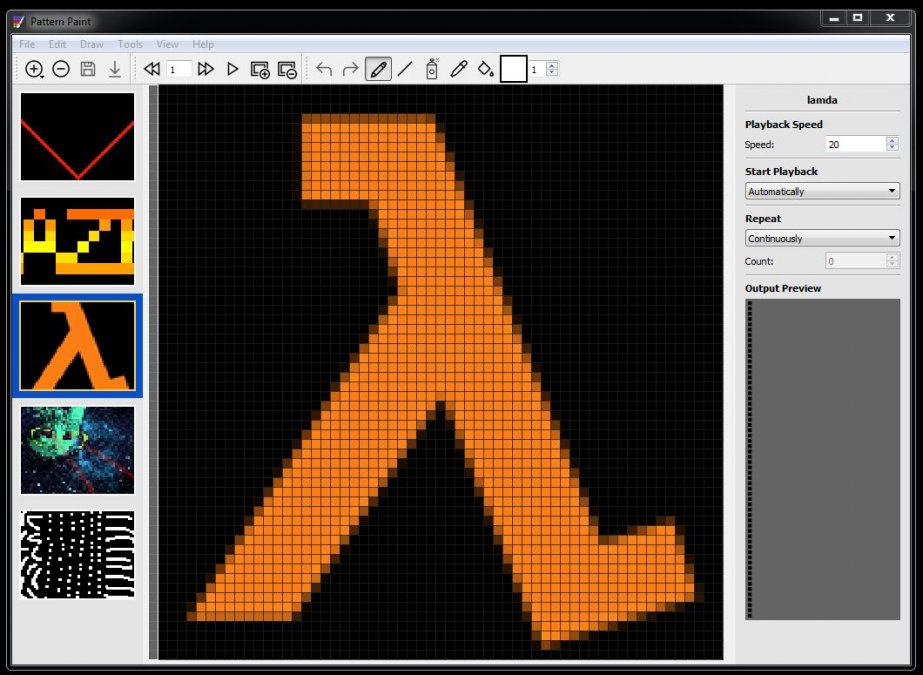 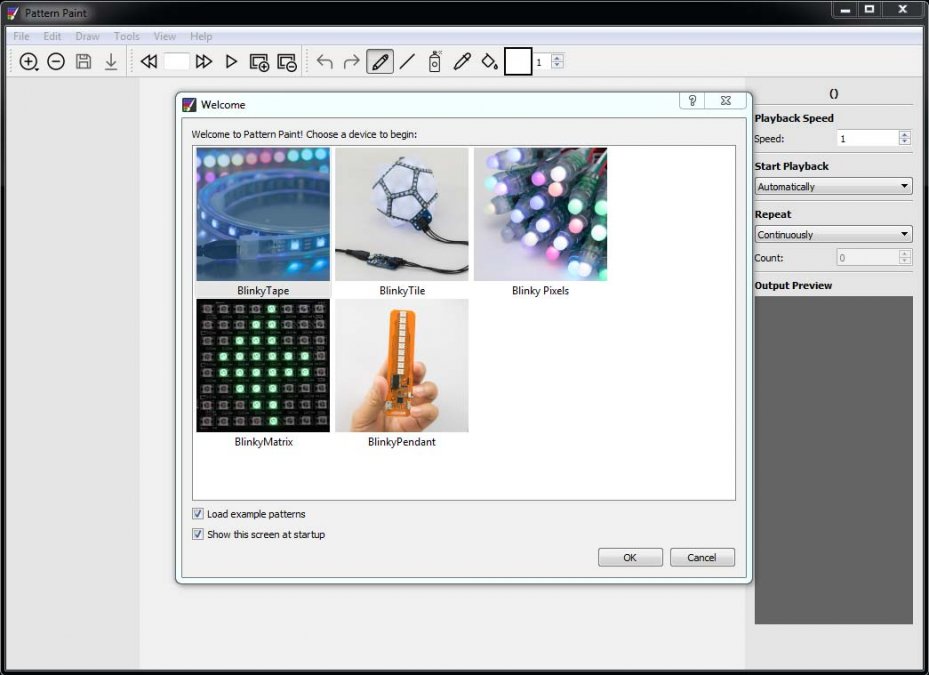 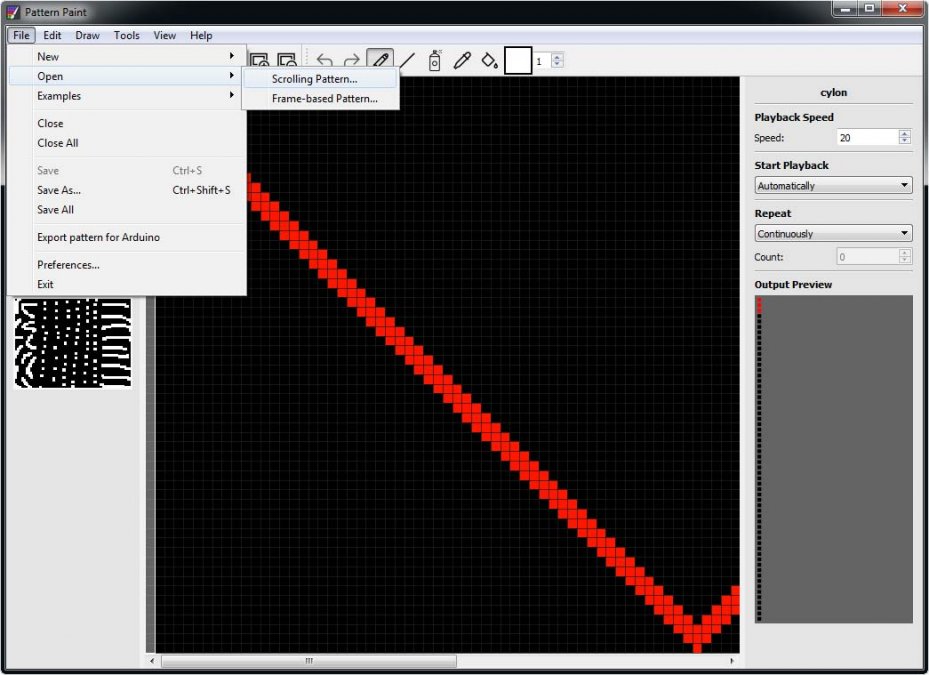 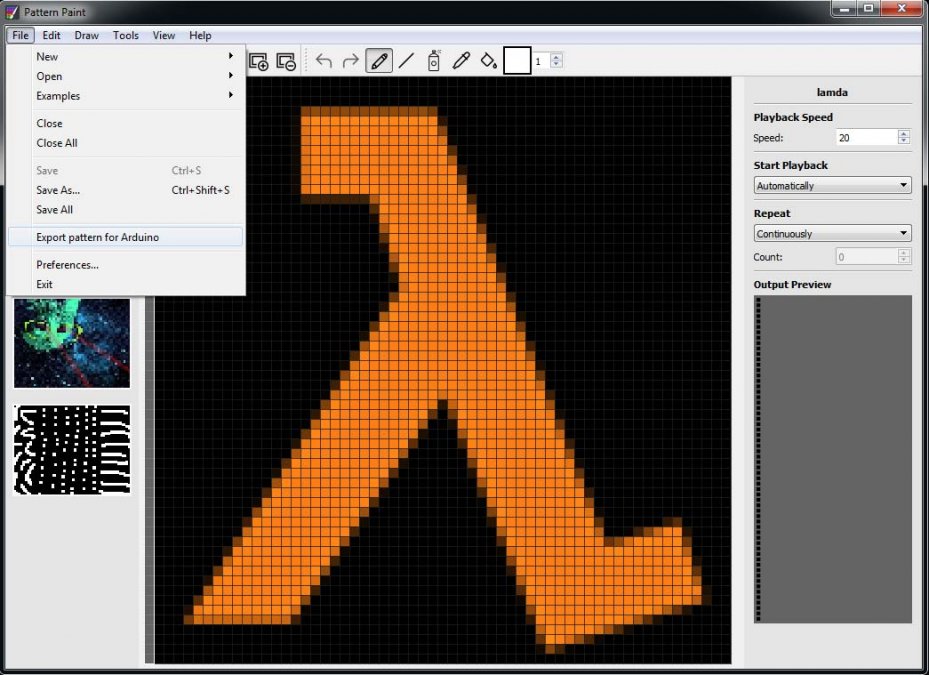 Finished. Pattern Paint has done it for you.
Okay. You have to get it working on your Arduino..

Just some Arduinostuff
To get the stuff done, i downloaded a little help. It's called FastLED. This is a small library which gives you some easy ways to handle the LEDs. You don't have to invent everything twice. So: Download it and store it into the Arduino (IDE) library folder. (This path differs and depends on the OS you have. If you use windows: It's in the user's Documents. Mac OS will store it in the app's folder.)

This is my written code as an example:

Hint: The code above will not work. The generated header-files are still missing.
You can download the files, I've build for testing purposes here.
Just unzip them and place them directly into the folder, where you have stored the script from above.

Additionally you have to add a file called "animation.h". You can either copy the file from here directly:

... or take a look at the git repo from Blinky-Tape.
If you did everything right, the script is able to compile and will blink the symbol "lambda" in an endless loop.

A small hack to go:
The generated pattern will not work. This is a problem caused by an update of FastLED. Maybe Pattern Paint was forgotten to update, or isn't maintained anymore. I really don't know. So I fixed PatternPaint with some hacks, but found a better and much cleaner way afterswards to get this stuff to work:

Now you can add the file to your .ino-Script. That means:
Comment the lamda.h out and YOUR_PATTTERN.h back in. Replace the "YOUR_PATTERN" with your filename: 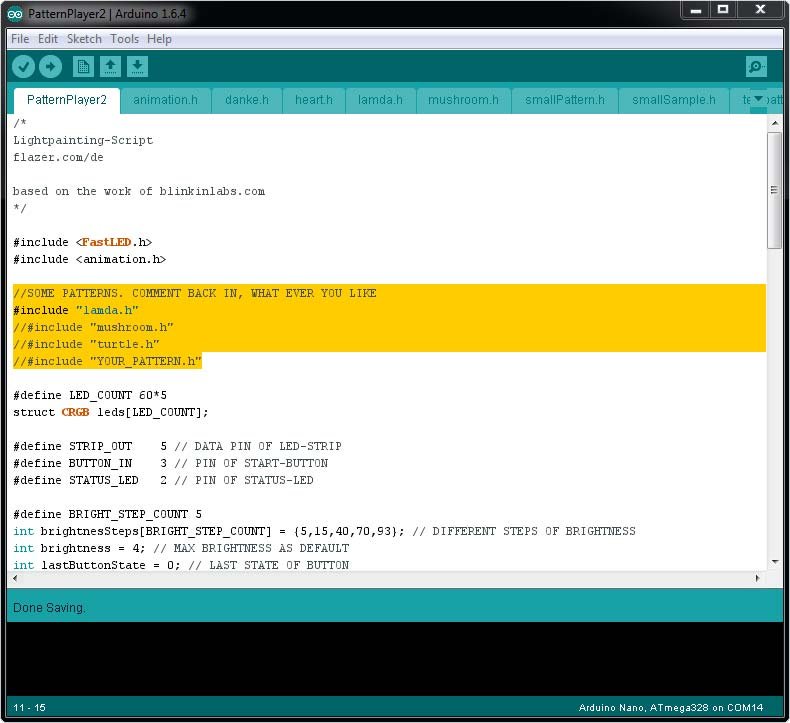 You are able to compile and upload the script! Yeah!

Powerbank
After I nearly finished everything, I realised, I have to add some sort of "powerstation" to it, when I go outside. It looks incredible stupid to use a cable reel outside and it's hard to handle. So I took the big "anker"-Powerbank and connected it. But nothing happend. After some googling I found out, that USB-Charger are telling the powersource, they are a what they are, by an 200Ohm (or less) resistor between their datapins. Perfect. I added a resistor with some shrinking tube to the USB-Jack and it worked! Everything is blinking and moving.

Stick aka broomstick
After I got everything to work, nearly 9 hours of work later, it was almost midnight. But I really wanted to test it this day. I decided myself to go the easy, more hacky way. This time I didn't print a nice construction or thought a lot about a nice way to hold everything in my hands while I'm walking. I just used a lot of Duct-Tape.
Result: A little bit risky and bizarre, but it will do it's work. Aaaand it's dark outside, anyways. Nobody will see the mess: 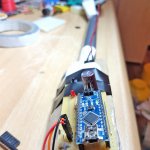 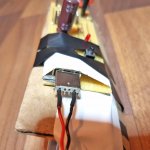 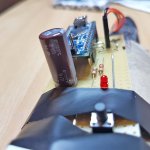 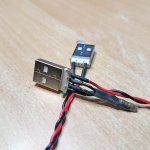 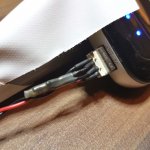 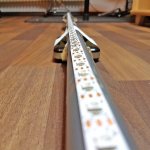 I like the result for this kind of construction: 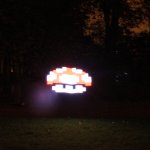 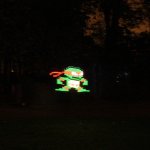 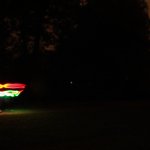 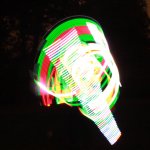 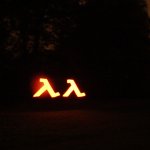 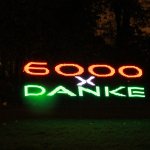 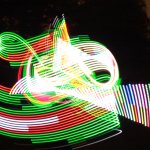 Ah. And the video I uploaded to Youtube afterwards, of course: